Where are they now? Caitlin Bovée 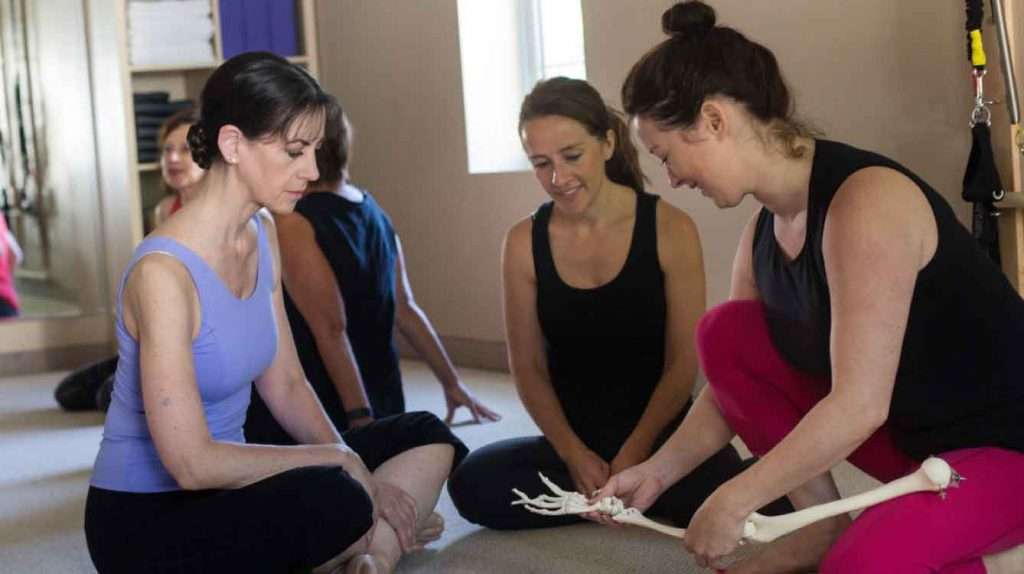 Where Are They Now?

In this, the first in our Where are they now? series on Shoptalk, we learn what inspired one of Body Harmonics’ first graduates and very first Education Partner to share the transformative benefits of Pilates & Movement with others.

“We all deserve to move with freedom and ease. Reconnecting with our bodies, honoring the gift our bodies, is a profound healing experience and I hope to help people along that path.”

Having been involved with Pilates and fitness for more than a couple of decades, I have come to realize that almost everyone who owns a Pilates studio has some sort of interesting “origin story.” But, I have to say, Caitlin Bovée, owner of Pilates in Guelph, and Body Harmonics’ first Education Partner, has one of the most dramatic (and inspiring) I’ve heard in a long time.

When I sat down with the 41-year-old just as the COVID-19 restrictions in Ontario were lifting, her sense of calm and collectedness belied the struggles and the successes that have fueled her passion for Pilates and movement since being introduced as a teenager.

The start of Caitlin’s journey

“My journey actually started when I was in high school. I was about 16 and I got very, very sick. I lost my ability to move and I had to deal with an autoimmune disease [SLE: systemic lupus erythematosus—a disease in which the immune system attacks its own tissues],” said Caitlin, who had been an elite level basketball player with dreams of pursuing a university scholarship and a future as a competitive athlete.

“I had to figure out how to make sense of the world,” she added. Following the distressing news, Caitlin, with the help and support of her Naturopath mother, Barbara McKinstry, and older sister, Ahmé Bovée, started to explore ways to rebuild her health and physical fitness. She first found relief through group fitness classes and personal training, later certifying in both.

“It got me kind of interested in moving in a different way than playing sports,” said Caitlin, who also attributed following an “anti-inflammatory diet” laid out by her mother to helping her tackle her health challenges head-on.

Shortly after that, Barbara took Caitlin and Ahmé to a Pilates class, and that’s when the pair became “hooked.” So much so that they both eventually became comprehensively certified teachers through Body Harmonics in Toronto, a process that required more than 700 hours of in-class training, practice teaching and self-practice, in addition to having to pass multiple practical and written exams. Ahmé later went on to open Pilates in Guelph in 2000 and became Body Harmonics’ first Education Partner, both of  which Caitlin took over when her sister moved to Michigan to open Bovée Pilates.

But that’s just the tip of the proverbial iceberg when it comes to Caitlin’s Pilates origin story. Following her introduction to the method of exercise, and before taking over her sister’s business in 2007, Caitlin headed off to McMaster University in Hamilton, Ontario to pursue an arts & sciences degree. Once again, however, Caitlin’s health had a mind of its own.

“While at university, I started having trouble concentrating. I was starting to have TIAs [transient ischemic attacks] and I ended up having to take a year off,” said Caitlin. Then, at the age of only 26, she suffered a stroke that left her unable to move much of the right side of her body. To say that she was undeterred is likely a stretch, but her positive attitude, determination and her knowledge of Pilates and movement science made her rehabilitation much faster and more profound.

“I had already done a lot of research into movement, education and rehabilitation so I put this into practice, along with my Pilates training, as part of my recovery,” she said. “By the time I went into see the Physio, they were like, ‘you don’t need to see me anymore’—because of what I had learned about the neuromuscular system and the neurology of movement.”

Not surprisingly, Caitlin’s personal experience, research and education shaped her outlook on life and on business: “Pilates has kind of been my medicine or my savior … I’ve been able to use it to meet me where I’m ever I am at, whether that’s very strong and very capable or not capable and barely able to move. And that is really what made me fall in love with Pilates.”

Since graduating from university, overcoming the impact of her stroke and taking over Pilates in Guelph, Caitlin has devoted herself to helping others benefit from the same health- and life-changing benefits that Pilates and integrated movement provided her—whether that’s teaching clients at her three studio locations in Guelph and the nearby town of Erin or training students to become certified teachers through her affiliation with Body Harmonics.

And, like most successful Pilates and movement professionals, Caitlin has augmented her training with related exercise and movement modalities and certifications, including: ACE personal trainer certification; Reiki levels 1 & 2; Dance therapy; Alexander Technique; and a full range of Pilates mind-body innovations with a specialized focus on post rehabilitation training. In addition to working with Body Harmonics Founder and Director of Education, Margot McKinnon, she has studied with Eric Franklin, Brent Anderson, Marie Jose Blom, Nora St. John, Tom Myers and numerous other expert in the field of movement fields.

“I hold Body Harmonics as one of the top teacher training programs in North America. I’m really confident in that. Knowing everything that I know now, I would still choose and recommend Body Harmonics training,” added Caitlin.

But nothing speaks to the power of Caitlin’s convictions like the opening line on her website bio:

“I am a Pilates success story and that is the number one reason I teach, run and own Pilates in Guelph. I want everyone to have the benefit of Pilates & Movement for their own ‘success’ story.”

Watch our interview with Caitlin here.

“People come to Pilates, yes, to feel better and move, but they also come just to be heard to be seen. And to be able to spend time with themselves in their own body in an environment where they feel safe and supported. And giving them that sort of gift is very essential.

“… when we do that, people will come back. Because the work itself is amazing … the skills that our teachers have, they’re amazing. But it’s the stuff around it that really needs to be focused in on so that the clients can feel that as well, not just what’s happening in the class.”

Caitlin’s thoughts about training “the competition”:

“I have spent my entire working life in this field. And for me getting more Pilates teachers or movement educators out there with Body Harmonics certification is a win. No matter what, I don’t think of other movement educators or Body Harmonics teachers as competition. They just add to the field and getting our message out there, and they make more people aware of the powerful, life changing services that we have for people. So I love training people.”

Alison Hope, BA, has worked in the health and fitness industry for more than two decades—both as a trainer and on the business side. She owns a boutique marketing and communications firm called Hope Communications which specializes in lifestyle and social impact brands. Alison holds a Body Harmonics Pilates Level 1: Mat & Level 2: Reformer diploma and is currently completing her Level 3: CCSB diploma.