How to breathe better and decrease your stress part 1: anatomy & function 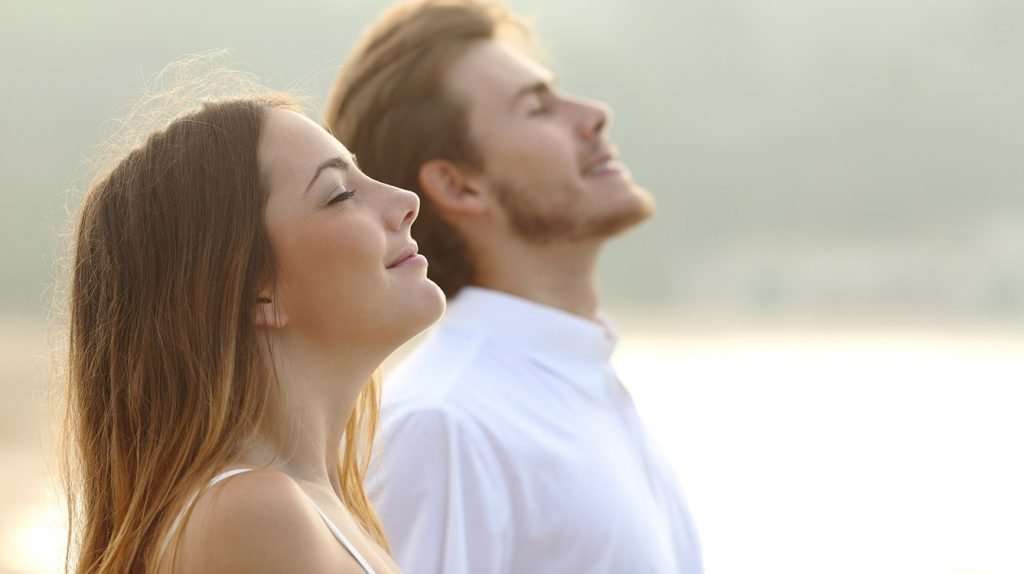 Many years ago, after fainting unexpectedly, I found myself in the back of an ambulance, speeding through the streets of Toronto headed to the nearest hospital. I was awake and lucid and could see the monitor that showed my vital signs from my position on the gurney. As I relaxed in the thought that I was being taken care of, I could feel my breath rate slowing down. On the monitor, I noted that my heart rate slowed in lock-step with my breathing. Even though I had been teaching yoga for a number of years, and knew the effects of breathing on the stress response, I had never actually seen the connection as clearly I did that day on the monitor. I realized at that moment the powerful connection of breath, stress, and relaxation in a way that I hadn’t seen before. In this article, I will explore the respiratory diaphragm, and the interconnection of breathing, stress, posture and the principles of Pilates.

The Anatomy of the Respiratory Diaphragm

The respiratory diaphragm is a powerful, domed sheet of muscle that separates the thoracic cavity from the abdominal cavity. During a relaxed inhalation, it is the primary muscle of breathing; perform about 70-80% of the work of breathing. The diaphragm at rest looks like the shape of an open umbrella, with a slight depression at the top, on which sits the pericardium, the fibrous membrane that surrounds the heart.   This part, called the central tendon, has an opening for the inferior vena cava, the largest vein in the body, which carries de-oxygenated blood back to the heart. There are also two other openings in the central, muscular part, one for the esophagus and the other for the aorta. The diaphragm muscle is roughly divided into three parts and resembles a wide cloverleaf shape. The diaphragm connects to the ribs, the sternum and the lumbar spine and spans the entire diameter of the torso. The long musculotendinous bands that tether the diaphragm downwards connect it to the fascial covering of the psoas major as well as the upper lumbar vertebrae and lumbar discs. The motor supply to the diaphragm comes from the phrenic nerves that originate from a larger network of nerves in the neck at the third, fourth and fifth cervical vertebrae. From there, the phrenic nerves wind down to the diaphragm along the pericardium around the heart. The sensory nerve supply (which give us information about pain and movement of the diaphragm) is mainly from the phrenic nerves as well, with the outside edges of the diaphragm supplied by nerves from the lower seven ribs.

The function of the respiratory diaphragm

The primary function of the diaphragm to help us breathe. When the diaphragm contracts (helped to a lesser degree by the external intercostal muscles), it moves downward in the thorax, pushing the abdominal organs downwards. This increases the volume of the chest cavity, resulting in air being pulled into the lungs. During exhalation, the diaphragm relaxes, and the elastic recoil in the lungs as well at the internal intercostal muscles, helping to push air out of the chest.

The movement of the diaphragm assists with blood circulation because the increased intra-abdominal pressure and decreased pressure in the chest cavity help to return blood from the veins of the lower half of the body to the heart. In addition to the pressure changes, the caval opening in the central tendon is fused with the inferior vena cava and this opening widens and dilates during the contraction of the diaphragm, helping to increase blood flow back to the heart.

The diaphragm also creates intra-abdominal pressure, which helps with coughing, vomiting, defecation, pushing during childbirth. Lastly, it can prevent acid reflux by applying pressure on the esophagus as it passes through the esophageal hiatus.

The stress response, also known at the “fight or flight response” is collection of processes that happens in the body as it prepares to confront or avoid a dangerous situation. It is the physiological response in which the sympathetic nervous system is activated which leads to the following:

All of these physiological changes serve the purpose of rapidly preparing the body to run or to fight.

But how does breathing affect this cascade of physical responses? The short answer is that is helps to activate the relaxation response.

Developed in our early evolutionary history, this response was helpful when we were deciding if we should hunt the mastodon for food, or flee because we might become dinner. Even today, the stress response can help us stay alert and ready for action and rise to a big challenge. But small day to day stresses like battling rush hour traffic, money troubles, work stress, the political climate and family issues can create long-term low-level stress that is detrimental to our health. While we cannot eliminate all stress, we can learn strategies to help cope with it; chief among them is learning how to invoke the relaxation response. First noted in the 1970s by cardiologist Dr. Herbert Benson, the relaxation response is a state of deep rest can be induced by practices such as yoga, meditation, and progressive relaxation. Common among these techniques in the ability to breathe deeply.

This is a breathing technique in which the air that enters your nose fills your lungs fully and the lower abdomen rises. With shallow breathing, the lower lungs do not get fully oxygenated and this can leave us feeling short of breath and anxious. Deep breathing increase oxygen exchange in the lungs. This in turn helps expel carbon dioxide. All of these processes help to decrease our stress.

How Does Deep Breathing Dampen the Stress Response?

Upon inhalation, blood is moved from your heart into the blood vessels of your lungs, creating a blood deficit for the rest of the body. To compensate for this, the heart increases it’s rate and pushes more blood into your body. Upon exhaling , blood gets returned to your body from the lungs and the heart rate slows down. Inside the lungs and the smooth muscle of the trachea (windpipe) are special neurons called mechanoreceptors that respond to a change in their length. The ones in question are called slow adapting (pulmonary stretch) receptors, or SARs for short. These receptors are activated by the stretching of your lungs during inhalation. When these SARs are activated, they cause an inhibitory signal to travel up to your brainstem to suppress the stress response. When the stress response is not allowed to run amuck, the relaxation response can be increased. In the relaxation response, heart rate, breath rate, muscle tension and metabolic rate are all decreased, allowing us to feel more at ease in our bodies and our minds. A powerful way to increase the expansion of the lungs and make the diaphragm function fully is to make sure we have optimal posture.

Posture and the Diaphragm

There is a reason our mothers told us to stand up straight when we were youngsters. Other than looking taller and thinner, proper posture decreases the work of just standing and sitting. When we slouch, the bones in our spine lose their optimal curvature. This in turn puts strain on our muscles and they now have to work to hold us upright, which is not their intended job. Proper posture allows our bones to hold us up, and our muscles to work to move our limbs efficiently and, for the purpose of this article, for our diaphragm to be optimally positioned to function the best. Since the diaphragm is attached to the ribs, this means that when we slouch, the ribs cannot lift and expand fully and the diaphragm is not able to move like a bellows to help us breathe deeply. Slouching also alters the length of the long tendons that attach the back of the diaphragm down to the lumbar spine.

Breath is such an integral part of Pilates that it is one of the Basic Principles of Pilates. Joseph Pilates asserts that we should breathe using deep, controlled, diaphragmatic breaths. Unlike breathing in yoga, we should inhale through the nose and exhale through the mouth. He also suggested visualizing the lungs as bellows which we inflate and release to their maximum capacities. We should inhale at the point of the most physical exertion to oxygenate our blood to power our muscles. He wrote “breathing is the most integral part of exercise, and even if you follow no other recommendation, learning to breathe correctly is the most important thing”.

The diaphragm is a muscle unlike any other in the body, because it has connections to the ribs, the heart, the lumbar vertebrae, the abdominal muscles and the hip flexors. It has a central tendon that is not connected to any bone.

It helps us to breathe but also affects blood return to the heart. It is extremely responsive to stress and is a crucial element of the relaxation response. And, it looks pretty darned cool, as far as muscles go.

Next week, we will look at how to enhance the function of the diaphragm with breathing techniques and how to increase mobility in the chest and upper body to facilitate breathing. Stay tuned!

Cat Kajary, M.Sc., is a registered physiotherapist with a background as a yoga teacher. She graduated from McMaster University in Hamilton and has taken post-graduate courses in Orthopedic Manual Therapy techniques, Anatomical Acupuncture (level 1; AFCI), Nerve Mobilization, and Lower Back Pain. Cat is excited to meld her knowledge of anatomy and biomechanics with Pilates, and has attained her Body Harmonics Pilates Level 1 Mat & Level 2 Reformer diploma.